Click on the map image below for a full size view. 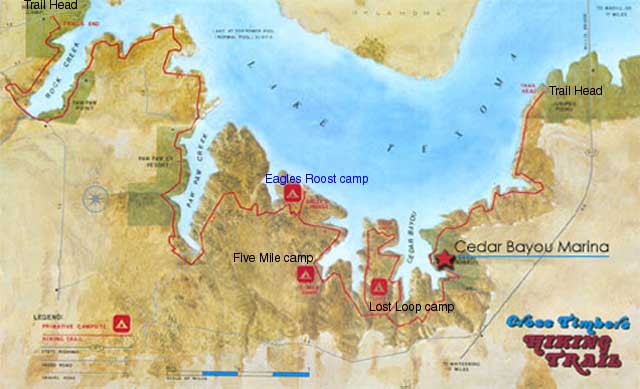 The Cross Timbers Hiking Trail begins in Juniper Point recreation area and winds west some 14 miles along the southern shoreline of the lake through Cedar Bayou and Paw Paw Creek resorts to Rock Creek Camp. Between Juniper Point and Cedar Bayou the hiker travels high above the lake on the rocky ledges that make up the shoreline. From these high vantage points one is refreshed by beautiful views of the lake and its shores. From Cedar Bayou to Paw Paw Creek resort the trail meanders through a blackjack oak woodland which typifies the Cross Timbers environment. This segment of the trail takes the hiker through many changes of elevation. Between Paw Paw Creek resort and Rock Creek Camp the trail is much flatter and the tree cover more sparse.

The trail is well marked and mile posts have been erected along the way as reference points. You can expect a moderate to easy degree of difficulty from the trail, as it is ideally suited for weekend adventures into the wilderness and for conditioning in preparation for extended wilderness trips.

ACCOMMODATIONS
You may wish to camp along the trail in one of the wilderness camps or in one of the developed recreation areas. Juniper Point, Cedar Bayou, and Rock Creek Camp have water and other conveniences not found on the trail. However, for those who prefer to rough it, Five-Mile Camp, Lost Loop Camp, and the Eagle's Roost Camp are available between Cedar Bayou and Paw Paw Creek resorts. These camps are primitive and have no water or conveniences.

PERMITS
A permit is not required; however, it is necessary to register at the gate shack in East Juniper Point from April through October. If you visit the trail from November through March, please sign in on the registration sheet at the trail head.

PRECAUTIONS
Water is not available along the trail except in the developed recreation areas. If you plan to camp in one of the wilderness camps it would be advisable to carry enough water to supply your needs.

The area through which you will be hiking is inhabited by several forms of wildlife, among them are the copperhead and rattlesnakes. Exercising good common sense and caution will prevent any unwanted meetings between you and them.

Ticks and chiggers are fairly common during the summer months as well as mosquitoes. A good brand of insect repellent or your favorite home remedy is a good companion along the trail.

FRIENDLY REMINDERS
Campfires are warm and can be friendly; we ask the same of our hikers. Dead wood makes the best fire and fire rings and grills make the best places for your campfires. You are encouraged to use the facilities provided at each campsite to contain your fires. And we also encourage the use of dead wood and ask you not to cut living trees for firewood. Never leave a warm campfire; always be sure your fire is out!

We ask that you leave nothing behind in the wilderness camps. Please carry out anything you do not eat or burn. Be considerate of others and help preserve the trail's natural beauty.

The Cross Timbers Hiking Trail was designed for the enjoyment of backpackers, hikers, and walkers. Motor vehicles are prohibited on the trail. It is our intention to maintain this area in such a way as to preserve its natural beauty. You can help us through your actions. Obey the restrictions and report violations to a ranger.

The origin of the term Cross Timbers is obscure. We only know that during most of the 19th century it was applied to the two broad belts of timber that extended northward from central Texas to the Red River and far beyond through territorial lands that are now Oklahoma to the south Canadian River just south of Oklahoma City.

Washington Irving, after his famous prairie tour of 1832, described traveling through the curious stunted forest belt of heavy brush, briars, and scrub oak as "like struggling through a forest of cast iron." An early Government publication termed the natural barrier west of the 99th parallel as "uninhabitable to man or beast, " and on an 1834 Government map Cross Timbers is designated as the "western boundary of habitable land."

Historians agree that Cross Timbers played a most important role in both the economic and the ethnic factors of the region it penetrated. It served as an almost impenetrable barrier between Indian Territory and the Plains Indians Tribes to the west. The Plains Indians tried burning it out, cowboys coming up the Chisholm Trail cussed it and tried to avoid it, and sodbusters attempted to wipe it out with axes and plows. Despite the encroachment of civilization, that barrier has never been completely erased.

The eastern belt...called the Lower Cross Timbers, was about 25 miles wide, and laid on a north-south line between Waco, Texas, and Sulphur, Oklahoma. It passed through the Lake Texoma area. The western belt or Upper Cross Timbers averaged 60 miles in width and extended along an irregular line between Abilene, Texas, and Oklahoma City, Oklahoma. The two Cross Timbers joined temporarily just north of the Texas-Oklahoma border. They were generally separated by a 30-mile strip of black prairie land in Texas and Oklahoma, but were up to 100 miles apart at their southern limits. Long peninsulas of woodland extended out into the prairie and small islands of trees were common, usually on top of a low hill surrounded by grasslands.

In marked contrast to the rich, black soil of the prairie, that of the Cross Timbers was thin and sandy, with occasional outcroppings of clay. In a few places there were heavy flat stones, which were called iron rocks to indicate their weight and to distinguish them from the red sandstone found in some places where rain had washed away the soil.

The trees in this area included the blackjack, which seldom grew to a height of over 30 feet. Usually they were found on rough rocky land, and were sometimes called poorland trees. On the level sandy land grew the post oaks, which might reach a height of 50 to 60 feet. On some of the sandy flats the principal trees were hickory, while along the small streams they were elm, cottonwood, hackberry, walnut, pecan, and chinaberry.

There was a wide variety of edible plants including dewberries, blackberries, mulberries, three or four kinds of plums, persimmons, black haws, red haws, and at least three varieties of grapes. The mustang grapevines sometimes climbed to the top of tall trees. Other types of grapes were the winter or possum grapes, not ripening until late autumn, and sand-beach grapes. Both blackjack and post oak trees produces quantities of acorns, but they were too bitter for human consumption. Therefore, the only nut-producing trees were pecan, hickory, and walnut.

Other plants of interest were found in these woods. Redroot, horehound, and stillingia were said to have much medicinal value. Housewives often picked lamb's-quarter, poke leaves, and dock leaves to be boiled and eaten as wild greens. There were also plants to be avoided, such as poison oak, poison ivy, stinging nettles, the big bull nettles, and sand burrs.

With the exception of cottontail rabbits, fox squirrels, and opossums, few wild animals lived in the Cross Timbers in the last century. A few raccoons and skunks could be found, and possibly a fox or a prairie wolf might be seen once in a period of 10 years. The big jackrabbits were found mostly on the prairie. There were snakes, but they only poisonous ones were the copperheads. Many birds of various kinds lived in the Cross Timbers, including the big turkey buzzards, crows, mockingbirds, shrikes, quails, turtledoves, meadow larks, bluebirds, several kinds of hawks, blue jays with their bright-blue coats and white underclothes, hoot owls, screech owls, whippoorwills, and woodpeckers.

Today, more wildlife lives in the Cross Timbers Hiking Trail than in the original Cross Timbers area. Deer, bobcat, coyote, and armadillo are among the many inhabitants of the area now. The area between Juniper Point and Rock Creek Camp is regenerating itself in the tradition of the Cross Timbers of the last century. The trail winds its way through a blackjack and post oak woodland reminiscent of north Texas in the 1800's.

Motor Vehicles are prohibited on the hiking trail.

ACKNOWLEDGMENTS:
The Cross Timbers Hiking Trail was built by the Corps of Engineers in 1969. Between 1969 and 1975 the trail was maintained by the local Scout groups, the Dallas Chapter of the Sierra Club, Texoma Outdoor Club, and the Corps. During the winter of 1975-76 the trail was remarked, the wilderness camps established, and a name chosen. Once again local Scout groups, the Sierra Club, and the Texoma Outdoor Club helped out by doing much of the trail maintenance. For their support of the hiking trail and their maintenance efforts, the Corps of Engineers is grateful.

Back to Trips page