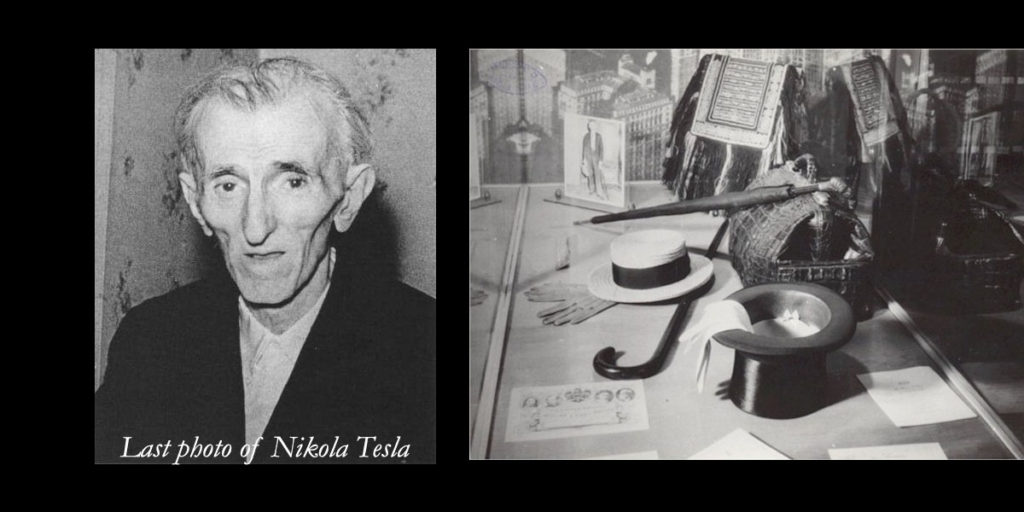 On January 5th, 1943, Nikola Tesla placed a “Do Not Disturb” sign on his door of room #3327 on the 33rd floor of the Hotel New Yorker in New York City. He died quietly and alone. Ignoring the sign, maid Alice Monaghan entered the room to find Tesla dead in his bed. Assistant Medical Examiner H. W. Wembly was called to the scene and after examination of the body, gave his opinion that the cause of death had been coronary thrombosis and that there had been no suspicious circumstances.

Tesla’s body was taken to the Frank E. Campbell Funeral Home at Madison Ave. and 81st St. A sculptor named Ivan Mestrovic was commissioned by Hugo Gernsback, a long-time friend and supporter of Tesla, to create a death mask which is now displayed in the Nikola Tesla Museum. Also in the Museum are a display of his personal things as an illustration of his life style: an elegant crocodile leather bag, gloves, glasses, shaving bits and an embroidered bag, “Licka torba,” made by his mother. Numerous papers, photographs, letters and notes are displayed along with a number of instruments found among Tesla’s belongings. They might have had a special value to Tesla since he kept them until the end of his life. Unfortunately there is no evidence whether Tesla kept them in his room or somewhere else.

The second room is devoted to Tesla’s life in the United States. There are again a number Tesla had close friends who were writers and artists. Among them were Mark Twain and Robert Underwood Johnson whose photographs Tesla possessed. Tesla’s contacts with his native land, papers about his visit to Belgrade in 1892 and his letter written in 1942 supporting actions of American President against fascism are selected as illustrations of Tesla’s patriotic and humanitarian activities.

This page was originally published online at:
http://sciencevibe.com/2016/09/20/the-maid-who-found-tesla-dead/

Back to Nikola Tesla Tribute Table of Contents